Home › Being Prepared › Be Prepared: The Emergency Bag

Be Prepared: The Emergency Bag

Posted on December 6, 2019 by cathleentownsend — 20 Comments

There’s one type of prepping that I’ve got a lot of experience with—what I call my emergency bag, aka the bug out bag, the get home bag, etc. You can call it anything you like, but emergency bag is what makes sense to me.

I’ve carried an emergency bag for over thirty years. It started as a natural outgrowth of the diaper bag. Having an extra change of clothes, some extra food and water, and basic first aid just seemed sensible when I had young kids. If they fell into a mud puddle playing at the park, we could still make their music lesson on time. If someone scraped their knee, I was ready for that, too. And if we ever got stranded, it was no huge deal. I had it covered. That’s a good feeling.

I got very methodical about it, however, this past summer when I set up my bag after researching the topic. I took all my stashes from various vehicles and made modifications based on the ideas that I thought worked best. Then I took it camping to test it out.

Most folks seem to agree that emergency bags should cover several bases—food, water, shelter, first aid, and fire. I would add rain protection, spare clothes, and money to those basics, since those are the things I’ve used the most. It doesn’t even have to be an emergency.

Case in point: when the kids were young, we did a home-schooling program every summer, and part of that was a field trip every Friday. We lived in Whittier at the time, a suburb in southern California, and LA has an awesome selection of museums and extra-curricular activities. We drove on this particular day to the LA Zoo at Griffith Park. For those of you who aren’t familiar with southern California geography, this represented about an hour’s investment of time, and given the fact that you need to squeeze trips in between peak traffic times, there’s no real margin for error. Anyway, we got there, got parked, and then I discovered I’d left my wallet at home. But it was no problem. All I had to do was dig into my emergency money stash, and we were good to go. The day was saved. So my top pick is:

In fact, an unexpected motel stay is the number one way I’ve used my bag over the years, due to inclement weather or mechanical difficulties. I’ve never had to push myself over a mountain pass when I’m too tired or the weather’s iffy. I can play it safe instead. Although, since I usually have at least one dog with me, I make sure I can also pull a camping trip out of my car if necessary. Many motels don’t allow dogs. And even if you don’t have a dog, you might break down in a spot without a convenient motel room. 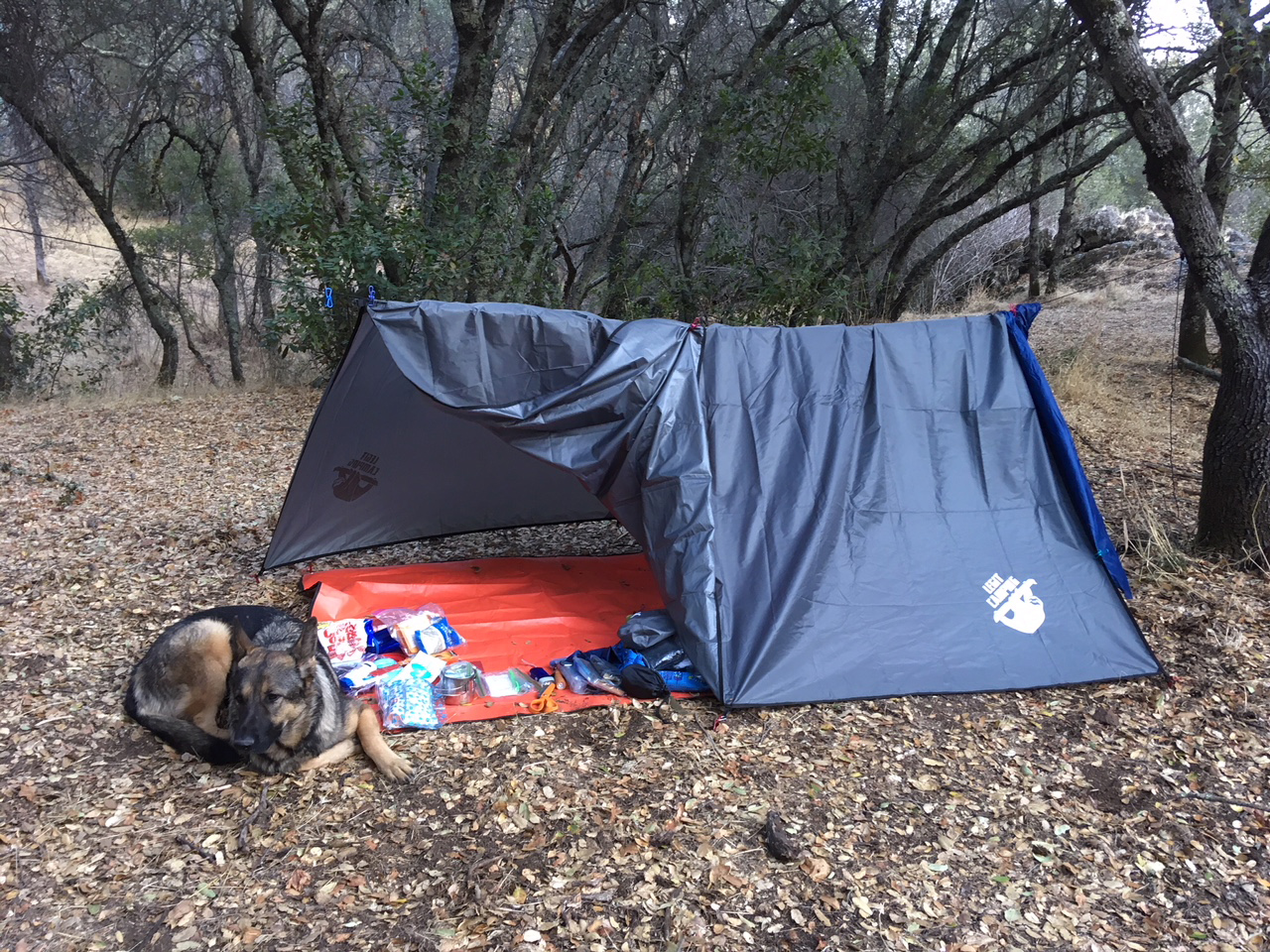 In addition to a cash stash, I’ve found the following to be useful as well, listed roughly in order of importance.

Really don’t skip that last, by the way. I once had to give my five-year-old rescue breaths by the side of the 105 freeway when he stopped breathing. That kept him alive while my older son and daughter ran to a call box and called an ambulance. (This was back in the 90s.) Be ready for this stuff before it happens. It’s hard to think clearly when it’s someone you love, no matter how many CPR classes you’ve taken.

Since I live in an area prone to wildfires (these pics were shot in my yard), where having to pack up and go is a distinct possibility, and since I have dogs and a cat, camping is something I need to be prepared for. I may not be able to get a motel room. So, I fixed up another bag with all the stuff I wished I had room for in the one I carry around with me all the time. If I’m home when the call comes and I only have a few minutes to pack up, this is very sanity enhancing. This actually happened to me this past summer. I was able to round up the dogs, my cat, his carrier, and still get the camping gear in my car in under ten minutes. I also keep a bag packed for both my husband and myself that has three day’s worth of clothes. Once I had all that stuff in the car, I didn’t feel panicky anymore. I knew the most important bases were covered.

I would seriously consider a backup bag if you live in an area at risk from wildfires, hurricanes, tsunamis, or tornadoes.

My backup pack, which is bigger than my everyday bag, has:

Next to the backup bag in the garage, I also have a plastic bucket with a week’s worth of Mountain House freeze-dried food in it. I figure that should be enough, at least to start. The entire state can’t go up in flames at once. No matter how badly the politicians seem bent on mismanaging California, I still have faith in the brave firefighters who live here.

And there you go. That’s my system for being prepared away from home. My emergency bag weighs 21½ pounds (much of it food and water), which is the upper limit of what I can carry, but I could haul it about four miles if I really needed to. I’ve never had to, but I’m doing my best to cover all possible events. I can bug out and camp, I can car camp, I can stay in a motel, stay in my car, or just decide I would rather spend the night at a beautiful waterfall and go home in the morning. (Did that once at McArthur-Burney Falls, just this past September.) My general guideline is that my preps have to make my life better now.

Everyone’s bag ends up being tailored for their individual needs, but I hope mine is at least a starting place for yours.

Also, a quick note on the timing of this post. Christmas is coming, and what do you buy for the person who has everything? Perhaps a bag to keep them safe in an emergency. My particular bag costs over two hundred dollars, but there are places where I splurged. The cheapest I’ve gotten a similar bag, using a ten-dollar backpack from Walmart, the cheap mylar tent mentioned earlier, (basically everything as cheap as possible at Walmart and the Dollar Store, and also skipping a few items like the shovel and those further down the list), is around $85, and that didn’t include a money stash. Add $170 per bag if you’re going to give it as a complete set up (motel room plus a tank of gas plus a couple of hot meals).

But you don’t have to do it all at once. If these bags are for you and your immediate family, you can start small, and then add to it. Or for others, it can be a series of gifts.

No matter what version you choose, it’s not cheap. But when I gave one to my dear friend for her birthday last summer, her eyes misted up and she said, “This is the nicest gift anyone has ever given me.”

Totally worth every penny. : )

20 comments on “Be Prepared: The Emergency Bag”