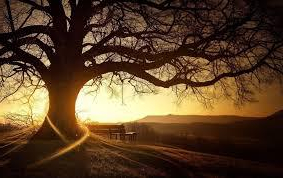 A shudder of pleasure ran through the oak as the girl settled herself at its base. She pulled out her notebook of sheet music and unpacked her guitar.

As she tuned the strings, the oak basked in the warm sun of an early spring day. Mossy and gnarled, it had stood on the hillock for three centuries. Its roots threaded deep through the red clay soil, holding the bank in place when the nearby brook swelled from the winter rains. Mistletoe hung from its boughs, but the tree had supported the interloper long enough that it had become an old friend.

Its life was written in every fiber of its being—droughts, floods, seasons both wet and dry—all contained in concentric rings, dark and light. All its wisdom was held there, even as it provided a haven for oblivious arguing squirrels and scrub jays. It had seen uncounted fledglings take their first flights even as it delved deep into the earth. Roots grasping, water pumping–the slow exhale of air for the creatures who ran hither and yon, in and out of its ken.

Slow thoughts were usually more comfortable, moving at the speed of life-giving sap, but it was worth the extra effort to hear the music the girl played. A quick dance of notes, like sunlight shimmering from a ripple in the stream, and gone just as fast.

The girl was stuck on a phrase in her song today. Her words bade a friend a fond farewell, and she worked one line over and over again, determined to get it right. The tree approved. Every creature should shine while it could. Even the grasses and poppies bloomed and seeded themselves before they withered and died.

The whine and rumble of an engine briefly disturbed the girl’s song, but she began again, and the tree basked in the melody as it might in the sun’s rays. It was a beautiful piece, the best she’d ever played, and the tree sunk the cadence of the words deep into itself. This song should be kept with the rest of its life, deep in its inner core.

A trail of ants stretched over a protruding root, the tiny black insects carrying morsels back to their dens. Worms slithered between rootlets, as if in a giant maze, never losing their way or their purpose. A hummingbird paused, glimmering in iridescent beauty, before zipping off to a nearby clump of blue-trumpeted larkspur.

The oak stretched its awareness to each twig and rootlet, feeling the heartbeat of every living thing in its reach, reveling in the moment that connected them all together. This was true wisdom, this above all should be saved.

The girl packed away her guitar and pressed her cheek against the tree’s rough bark in silent farewell. Only a few minutes later her place was taken by two men with a chainsaw.

The tree lifted its awareness in a silent prayer that its wisdom could be saved, perhaps as a musical instrument or a book. Then it shuddered in pain as the metal teeth bit deep into its trunk. 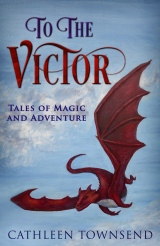 If you enjoyed “Oak,” you can pick up a copy, along with thirteen other stories, here: