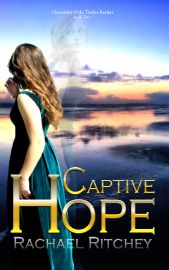 There’s a new installment in the history of The Twelve Realms! For those of you not yet familiar with them, their tale is chronicled by the inimitable Rachael Ritchey. The story began with The Beauty Thief, where Caityn struggles to keep both her beauty and her soul—along with the heart of the man she loves.

In Rachael Ritchey’s newest release, Captive Hope, The Twelve Realms seems an idyllic nation, but behind locked doors there are sinister powers at work. Not even the royal family of High Castle is outside their reach, and Lady Idra has unwittingly placed herself in the crosshairs of a shrewd mercenary.

Idra is noble by birth and lady-in-waiting to the future High Queen of the Twelve Realms. Sir Ahmad, a knight of the realms, admires Lady Idra from afar. But he could lose Idra forever because of the mercenary’s devious ploy to gain revenge and riches by her ruin.

This is the point in the story where Lady Idra is traveling on a surprise trip to visit her parents. Her party is attacked on the road, and her escort is left dead while she is taken prisoner. It’s unlikely anyone will be coming to her aid.

Idra remembered his face, but she couldn’t remember his name. Sitting this close to him, she couldn’t forget his scent. This was the man who’d helped to kidnap her the year before, who’d wanted to sell her into slavery, who’d teased her by throwing knives at her head. He was also the man she’d knocked from his horse and escaped from in the raging Bear River. It never dawned on her he would seek revenge. What kind of maniac would do such a thing?

She cried for her escort and the sweet young maid who’d been with her. She cried knowing her parents weren’t expecting her arrival, and Caityn wasn’t expecting her back for at least a week and a half. No one would look for her for quite some time. By then . . . . She couldn’t even imagine.

The man who held her tight upon his horse said nothing to her. In fact, none of them spoke the rest of the day. Their quiet efficiency was unnerving.

Idra had only been off the horse two times during the day, and now, late into the evening, she was so sore she could barely hold her body upright on the horse. The only thing keeping her from slipping off was the mercenary’s arm around her.

“I’ve spent the last year thinking on how I would bring this very moment about.” His whispered words tickled the tiny hairs on Idra’s ear. “All my plans, though, were for naught, because your trip changed everything. Really, you made this so much easier for me. Now you are here, and I’m disappointed.”

Captive Hope will be released January 22, 2016. To find out more about Rachael Ritchey, go to http://rachaelritchey.com/.