Posted on November 27, 2015 by cathleentownsend — 7 Comments

I met Daniel White at Thinkerbeat, which is a site that I highly recommend. They have frequent contests, and you don’t even have to win to appear in their online magazine if they like your work. Their first anthology, The Art of Losing, is about to be released (and hey, I’m in it 🙂 ), and those publication credits are an important thing for a writer looking to build their resume.

Daniel, what inspired you to start publishing?

I wrote my first story when I was really young. I used to sit with a typewriter and clunk away at the keys for hours. I’d make a lot of mistakes, but I kept trying. Later, I started sending stories out for publication. I got a lot of rejections, just like everyone does.

In college I studied the music business and learned about managing talent. I also played with the idea of becoming a computer programmer, but my creative side won out and I spent a number of years working in the music business.

Down the road, I got an offer to write a children’s book for a publisher. I thought, well, 500 words, how hard can that be? It took me months to finish it. You spend more time with words describing the illustrations on the page than you do putting words on the page. My editor was never happy and we disagreed on a lot of things. But I learned from him. I also kept in mind that if I didn’t play along, I’d never get the book published with my name on it.

From there, I started working on writing textbooks for schools for a publisher. Around that time, I was struggling with my own writing, though, writing creative stories, that is. I more or less thought I’d never get anywhere, because the rejections for my stories were still pouring in. I guess that’s when the practical side took over and I decided to go back to school and get an MBA degree.

In the master’s degree program, we had to write a lot. And it became apparently early on that I was better at writing business reports than the other students in my classes, just because I’d been writing for a long time. At that point, I decided to take what I was learning and start up my first publishing company. We handled mostly textbooks. We also sold internationally, which was challenging, dealing with import/export laws, shipping costs and taxes. It was great experience, though.

After earning my MBA, I landed a full time job at a university teaching both business courses and writing courses. During one semester, I wrote the code of an online business simulation platform, which students could log into and form companies with and market fictitious products under. It was a great success and from there I started pondering how I could make something like that available to authors world-wide. 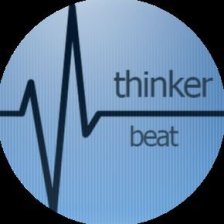 Thinkerbeat was born, but under a totally different name at that time. The code went through hundreds of revisions before it started to come together like we see it today. For work flow, I really believe in finding consensus among the active members of the site. An example of that is the name of the site, Thinkerbeat. Kate Cudahy of Wattpad fame come up with the idea, and everyone else endorsed it right away.

Kate was one of our earliest members. She and I were working on a book I was revising at the time. She’s a great beta-reader. And getting feedback from her gave me the idea that the site could be utilized for providing feedback for other authors. At that time, Kate had amassed over a quarter million readers on Wattpad as the author of Hal and now she’s teamed up with Firebrand to sell her books there.

Another big influence on the site is David Grigg, also an early member. He’s been really helpful in getting the book cover for the Thinkerbeat Anthology finished, giving constant feedback and support. He runs a professional book cover and book formatting business. He’s also a really prolific author. David is a low-key person, taciturn by his own definition, but in all honesty a really solid guy and someone I consider a friend. David’s claim to fame was being the chair of the 43rd World Science Fiction Convention. He’s also the current editor-in-chief of the Novopulp anthologies, another site I endorse and encourage authors to take a look at.

There’s Almari Randall who studied fiction writing at Harvard. She’s work-shopped with a number of talented writers and is really helpful at guiding up-and-coming writers along. Patsy Collins has published stories in more places than I can count. I’d also keep an eye on people like Jill Hand and Manuel Royal. Well, OK, a lot of the writers on the site are impressing me these days.

What bothers you more: spelling, punctuation, or grammar errors?

Punctuation. It’s right there in front of you, in the books you read. You should know how to do it. Look closely at how it’s done when you read. And you should be reading a lot, especially if you want to be a great writer.

What do you do for cover art? Do you do it yourself, hire an artist, or purchase pre-made?

It’s different every time. Sometimes the answers come easy and sometimes problems like this take forever to solve. For the Thinkerbeat Anthology, we decided on the title almost overnight. I like to get a consensus and so I shared a short list of ideas with several people. The Art of Losing stood out as the best choice in everyone’s mind without much debate at all. When you know you’ve got the right one, you breathe easy.

For the cover art, that took weeks. We played with so many ideas that I was getting frustrated with it. We talked to professionals and got a lot of feedback from everyone. I had this stock photo of a set of lost keys that I really liked, but I didn’t want to use a stock photo because there’s always the chance it will show up somewhere else. I wanted an original.

One day I took about half a dozen pictures of my own set of keys, as reference shots, probably spending a whole five minutes on it. Then I sent those photos out and asked if any of the professional photographers I knew could make a better one for me. The answer came back universally that one of the pictures I’d already taken was going to be the final one. The shot we wanted to use was right there in front of me, in my own camera. I’m still a little surprised by that. I’d taken the winning picture myself.

What is the single most important quality in a story–what must an author do to win you over?

Clarity. Make the image in your head clear on paper. As writers, we get a picture, and we draw it with words, but we often don’t realize that other people, our readers, can’t see that picture because it’s not inside their heads like it is in ours. When we read the words, everything make sense to us, because we can see it. What’s hard is making other people see it. Make the picture in your head as real as possible on the page so that your readers will know exactly what you’re talking about.

Start with short stories. Avoid writing a full length book for a long time. Focus more on structure of the story and less on individual word choice. Learn the meaning of exposition, conflict and resolution, and the way to write a basic three act story. Don’t get too hung up on the rules, either. Do get totally hooked on developing a unique writer’s voice, full of your own nuances and idiosyncrasies. Don’t let anyone take that away from you. Only after you’ve tackled all these things, then try to write a book.

William Faulkner. He created a genre by himself. Cormac McCarthy. He took what Faulkner was doing and brought it to a whole new level.

Tell us something that will surprise us.

I once road my bicycle across Alaska. I spent two months living alone in the wild there, writing a journal, and that inspired me to try my hand at travel writing.