Bleak New World is Out!

Posted on September 15, 2015 by cathleentownsend — 5 Comments 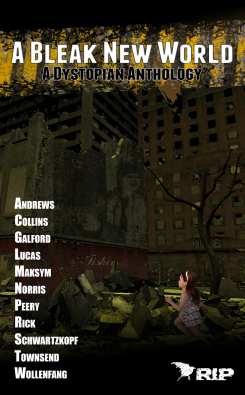 On October 30th (2015), A Bleak New World, a dystopia anthology, will be released by Raven International Publishing. (Pause here a moment and picture my happy dance around the office. It’s quite a good one. Lots of woo-hoo’s.)

Hey, it’s not every day you become trade published. Okay, Dragon Hoard was published by Every Day Fiction, which is awesome, but this is a book I can actually hold in my hand. I know digital is where the profit’s at, but I’m still emotionally attached to the whole physical book thing. *shrugs*

See my name, second from the bottom? I have to admit, I failed at one of my childhood ambitions. My maiden name started with an S, and I really hoped I’d move up in the alphabet when I married. But my husband’s a nice guy, so I forgave him for being even more alphabetically challenged than I was.

My story is called Property, and it’s all about what could happen in the future Republic of California after the economic Armageddon. I really hope this is not one of those life following art things because to quote one of my beta friends, Stephanie, “Alright, you’ve crossed my line of creepy. And that’s hard to do.”

I actually feel quite proud of that comment. Creepy is not usually an area of strength for me.

I’m going to go ahead and post this now, although I’ll be adding to it. I’m still waiting on my advance reader copy as well as a link for anyone else who wants an ARC, in exchange for a fair review. Clark Chamberlain at Raven International Publishing has said that anyone who posts a review in the first week will also receive a free physical book. I’ll post link details as soon as I get them.

But for now, this is such an incredibly nifty thing, I really wanted to share it. 🙂

5 comments on “Bleak New World is Out!”