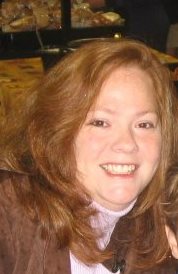 Elizabeth Welsford is the author of the IPPY-winning The Five Step Plan. She’s a mom, culinary adventurer, and single malt scotch aficionado who has become obsessed with writing historical fiction.  For the past few years, she’s made it her business to learn everything about obscure medical practices and hysteria. She is also a woman of no fear–at least when it comes to wrangling her Great Dane.

What about your most recently published/upcoming work?

My debut novel is called The Five Step Plan. It’s the rare historical fiction comedy, and was released in February of this year.  It takes place in 1829 London and follows the struggles of Dr. William Whitcraft, who yearns to make a significant contribution to modern medicine.  Hysteria, the scourge of polite English society, torments a great many of his female patients. The most common and effective treatment of the day is pelvic massage, but there is no standard method, so administering physicians are forced to fumble their way around for hours before a successful “conclusion” is obtained.

After fruitless attempts to improve the process, Dr. Whitcraft consults a dear friend whom he sees in an entirely different professional capacity—famous London procuress Elizabeth Minnock.  Bemused by his pursuit, she shows him a five-step manual technique, guaranteed to work on every woman, every time…and in less than ten minutes.  Dr. Whitcraft is thunderstruck, realizing at once that medicine will never be the same. My goal in writing The Five Step Plan was to illuminate the hypocritical world of 19th century English society, while having loads of fun in the process.

It’s funny, but I never really decided to write historical fiction, per se.  I mean, I love history, and always wanted to write stories, but never imagined that I would manage to combine the two.  It’s just that whenever I had an idea for a plot, in all likelihood the setting would be over one hundred years ago.  So, without meaning to, I became a historical novelist.

I was writing a scene for an earlier (unpublished) work where my main character was imagining his long suffering aunt draped over her fainting couch.  The story took place in the late 1700’s, and I wanted to make certain that fainting couches existed back then, so I did some research.  I was absolutely floored to discover the theory that fainting couches were devised so that women suffering from hysteria could be treated in their homes by physicians using pelvic massage.  I distinctly remember re-reading that fact several times, thinking that it couldn’t possibly have meant what I thought it meant.  If I had ever heard of about women having their nether-regions massaged as a medical procedure, surely I’d have made a note of it.  When my shock wore off, it wasn’t long before I knew this tidbit would be an ideal springing-off point for the historical comedy I’d always wanted to write.

How do you come up with your character names? 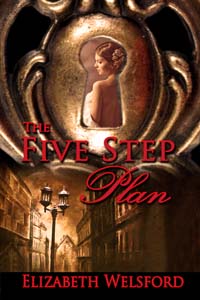 Well, for The Five Step Plan, I had an absolute ball with the character names. I’m a collector of old dictionaries filled with obsolete and funny-sounding English words. Years ago, when I was paging through one of them, enjoying words like buzznack (an old organ playing badly out of tune) and dingthrift , (a wasteful person), it struck me how funny it would be to have a story where all the characters would have obsolete words as last names. I loved imagining some superior, bull-dog of a man saying, Why, how dare you, Mr.Buzznack!  or an understated narration observing, Mrs. Dingthrift had an unfortunate pension for draining her husband’s resources…  It made me laugh just thinking about it. It would only work if it the story was a ridiculous comedy, so when I read about treating hysteria-riddled women with pelvic massage, I knew I’d found the perfect project.

In The Five Step Plan, I’d say my favorite character is Mrs. Pannade. She starts out as a miserable, sexually-starved wife of an uninterested man. Of course, as per the day, her crippling depression is diagnosed as a most severe case of hysteria. After enjoying a few rounds of Dr. Whitcraft’s five-step maneuver, she awakens from her stupor and quite quickly blossoms into the woman that she’s always wanted to be…a bold, self-possessed get-what-you-want kind of gal—with a touch of nuttiness to boot. Mrs. Pannade’s over-enthusiasm for Dr. Whitcraft quickly evolves from devotion to what would today be unquestionably classified as stalking. With a slightly imbalanced and relentless character like Mrs. Pannade pursuing the affections of my main character, the possibilities for comedy seemed endless.

Keep writing. I mean seriously, never stop. And everything counts as far as I’m concerned. It doesn’t have to be a short story, novel or screenplay. It can be a review of a book, a journal entry, a long letter to a friend. Words are our tools and to use them deftly, it takes practice. The flip side of this is to read. Read what you love and be open-minded enough to read outside of your favorite genres.

For comedy in particular, I have found that if a scene isn’t quite as funny as it could be, give yourself permission to rewrite it in the most absurd and ridiculous way you can imagine. When you think you’ve dialed-up the insanity enough, take it even further. Then, let it sit for a day, and go back to it. It’s never failed to surprise me how often this exercise has led to some of my favorite scenes.

It totally depends on the project. For The Five Step Plan, I had a rough idea of where I was going, but honestly, after a certain point, I knew the characters so well I just let them dictate what would happen. It was kind of fun to sit down at the keyboard and say, wow, I wonder what Dr. Whitcraft is going to do to get out of this mess. Other stories that I’ve written that are based on actual people and events in history, and must be more rigidly written so as to ensure accuracy.

You can find out more at Elizabethwelsford.com.