Home › My Stories › Welcome to the Cabin

Welcome to the Cabin 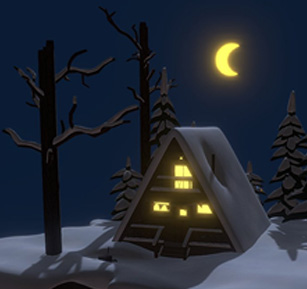 Welcome to the cabin.

First off, it’s important to remember that around here we get two seasons—winter and road construction. If you’re here when it’s cold, then it’s usually a good idea to keep the kitchen stocked with several days of food. It seems like whenever you least expect it, there’s a foot of new snow on the ground, and the snow plow won’t get there until the day after tomorrow at the earliest.

And always remember that at night, the front door needs the draft-stopper, which should be wrapped around the front of the hearth. It’s the thing that looks like a furry gray snake. That’s your best line of defense for keeping out Jack Frost.

No, I’m not being metaphorical—Jack’s a real threat here, and for more of the year than you might think. We’ve had several inches of snow dropped on us during the Fourth of July weekend, and all the poor tourists in flip-flops were scrambling to buy real shoes.

But Jack can do worse than just ruin your weekend. It’s often the late snows when he’s the most dangerous because folks have let down their guard. They think that just because they’ve been picking tomatoes in their gardens at home that they can come up to the mountains, and Jack will have lost his grip.

They may even think Jack’s not a real problem, just a personification of winter or some such nonsense. That’s because education today has left far too many folks lacking in basic knowledge, things that everyone used to know in order to deal with the strange and marvelous. Now-a-days, people are more likely to believe in aliens than Jack Frost, and that’s just crazy.

It’s also a pity, since a few basic precautions will ensure that Jack stays in his place. After all, a late snow can kill if it catches you unprepared. And so can Jack.

His favorite trick is to seduce you with loveliness. Most people want to escape the cold, at least after they’re done sledding and skiing, so he has to make you want to stay outside. He’s a real master at displaying the beauties of winter. He’ll show you secret groves filled with sparkling trees, looking like they’re covered in diamonds when a shaft of sunlight hits them. Or he can use the same sun to make you blink and turn your head away, and in the shadows, right where it’s easy to rest your eyes, a small cavern will beckon, filled with delicate crystals and curiously free of wildlife.

It’s okay to explore these places—just don’t do it alone. And keep moving.

Jack can only prey on you when you’re by yourself—think of him as a sort of vampire, only I’ve never heard that he particularly wants blood. He’s the most dangerous when you’re at rest, maybe curled up by the fire with a book. If a draft can creep under the door, that’s enough of an opening for Jack. That’s why the draft-stopper.

Keep moving when you’re outside, make sure he stays on the other side of the walls, and then all will be well. But not everyone knows these things anymore.

And the penalty for ignorance can be steep. Every year, people lose fingers and toes to frostbite, which is usually just another way of saying that Jack Frost took them on a journey and exacted his toll. And okay, you can get over that, but losing a digit is a steep price to pay for the lack of a little background knowledge.

And every winter, a few, usually those who are depressed and vulnerable, end up paying the ultimate toll. The way you can tell it’s Jack is because these are the ones whose bodies are later recovered with smiles lingering on their faces.

I’m glad they found something to be happy about at the end, but seriously, it’s not worth it. Just observe normal safety precautions.

And now that you know what they are, you shouldn’t have any problems. Have a great time at the cabin.

12 comments on “Welcome to the Cabin”