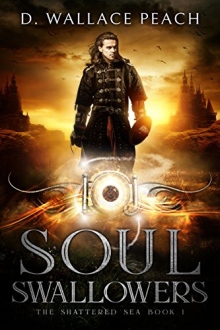 Have you heard? D. Wallace Peach has released a new fantasy series, and news like that is worth our attention.

In this book, Ms. Peach has taken a single world-building premise—that people can swallow other people’s souls after they die—and worked it into a fantastic, detailed secondary world. Here, the powerful squabble for ever more influence while the wretches and unlucky are sold into slavery. The main character, Raze, has turned his back on a life of wealth and privilege, and joins another man in building up a small farm, a freehold, assisted by former slaves who soon become an extended family.

But the Byzantine politics of Raze’s former circle soon entangle him again, and he’s forced to re-enter his old world to try to save the members of his new family.

Soul Swallowers transported me to a completely different world, one that I enjoyed exploring and was reluctant to leave. I highly recommend it.

Now here’s the place where you should imagine the radio announcer’s voice saying, “But wait, there’s more…” Because Soul Swallowers is Book One in the Shattered Sea series, which means that when you reach its finale, the story isn’t over. There’s still Book Two, Legacy of Souls.

I was lucky enough to read Legacy in its draft stage, so I can comfortably affirm that this series is complete and well worth the time invested reading it. Legacy of Souls is currently available for pre-order on Amazon.

But first, go check out the Look Inside on Soul Swallowers here: https://www.amazon.com/Soul-Swallowers-Shattered-Sea-Book-ebook/dp/B07DKV4FGJ/.