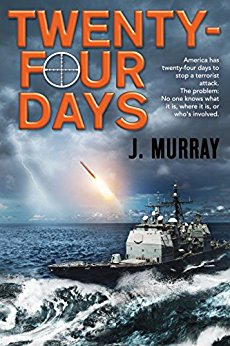 And that’s exactly what an extreme terrorist organization has managed to hijack–the US submarine Virginia, and its British counterpart, Triumph. Once the subs maneuver into position, the entire world will be hostage to the terrorists’ demands.

Former SEAL Zeke Rowe, artificial intelligence scientist Kali Delamagente, and her creation, Otto, have just twenty-four days to save the world from the threat of a mushroom cloud.

I read technothrillers, but I don’t write them. My mind struggles with the necessary details to make the story come to life. But Jacqui Murray obviously doesn’t share this problem. She dribbles in the necessary world-building in just the right places. The result is a tale that’s chilling in its plausibility.

I give it four stars.

If you’re looking for an enjoyable thriller read, peek inside the opening chapter here: https://www.amazon.com/Twenty-four-Days-Rowe-Delamagente-Book-2-ebook/dp/B072NZF8N8/.

Jacqui Murray was kind enough to chat with me over my favorite part of her novel, the character, Otto. She obviously put a great deal of thought into all her characters (I particularly like the way her antagonists aren’t two-dimensional bad guys), but Otto, the artificial intelligence robot, was my favorite.

So, Jacqui, can you give me more background on this very intriguing personality?

Sure. He’s more than simply a very fast search engine. He’s sentient in that he can respond to asked questions, come up with new responses based on the situation, read body language, and troubleshoot when necessary. Most importantly: Otto is self-aware. He knows he’s smarter than most computers. He prefers a human name and constantly wants to incorporate human habits and mannerisms such as chatting and humility.

To find out more about J. Murray, you can read her interview here: https://cathleentownsend.com/2016/08/19/interview-with-jacqui-murray/.

And don’t miss out on her excellent blog: https://worddreams.wordpress.com/.