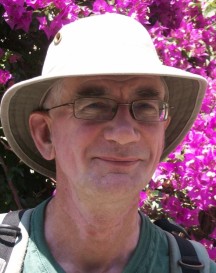 I met Mick through his wonderful blog, located at https://mickcanning.co/, and I was delighted when he agreed to be a guest here today.

Let’s start with you, Mick. Tell us about yourself.

I’ve always been writing, and completed 2 novels a long time ago. Both were so awful, though, that I junked them. It was a good learning curve, however, and now I’m hopefully a more mature writer. Until I become rich and famous (!), though, I make ends meet by teaching rock climbing, and occasionally some other outdoor activities.

I love travelling, especially to India and other nearby countries, which probably comes out in my blog posts!

I’ve learned a lot about India from those posts. How did you start your blog? Has it changed over time?

I have been following the blog at Writer’s Village (http://www.writers-village.org/writing-award-blog.php) for some time, and advice that I received in a comment thread was that if I wanted to have a platform for my writing, and gain a following, I needed to begin a blog now, not just when I thought I had a book ready for publication, so that’s what I did. It took me a little while to work out what I really wanted to blog about, and the appropriate combination of topics, so yes, it has changed a bit. Hopefully for the better!

Have you done any projects that took you way out of your comfort zone?

In a way, the whole of my novel did. I set it in India, but I continually found myself checking that I hadn’t made any glaring errors. I may have spent a lot of time there, but that doesn’t necessarily mean that I am an expert and I kept worrying that I was using the wrong word or describing a situation in a way that would never actually happen.

Making Friends with the Crocodile is currently on pre-order on Amazon with Kindle, and I am looking now at Print On Demand copies. It will be released on 4th June, although it is now available, as I say, to pre-order. The blurb on the book is:

‘Siddiqa was only just into her teens when she was forced to leave her home to live with her new husband and his family in another village. The years have passed, and now Siddiqa has three children of her own. Her grown up son has brought his new wife, Naira, to live with them, so Siddiqa is no longer the lowliest in the household, for she has a daughter-in-law.

Life in rural India is particularly harsh for women. This novel explores themes of female oppression and tradition and asks whether the next generation will find life any easier.’ 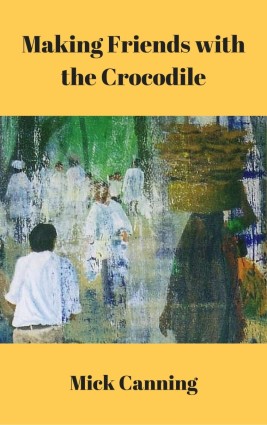 What do you do for cover art? Do you do it yourself, hire an artist, or purchase pre-made?

It’s my own work. The book is set in Northern India, where I have spent a lot of time and, in another role as a painter, I have produced a number of canvases depicting scenes there. The one I chose seemed to work particularly well after I cropped it, and I just put the image straight into Canva (a free program for generating book covers) for a cover.

Hurray! Another writer who paints their own covers. I was starting to feel like I was the only one. What project are you looking forward to next?

It’s a return to the novel that I had been working on before I was overwhelmed by the idea for Making Friends with the Crocodile, which is The Assassin’s Garden. Another one that takes me out of my comfort zone! The first part is set in Medieval Persia, and then moves to Mughal India, so there is plenty of research to do, and plenty of opportunities for error!

That’s both the beauty and the terror of writing historical. I love falling down the research hole, but there are so many ways to mess up. Still, my favorite writers pulled it off, so we can, too. 🙂 Who are your writing heroes and why?

The Argentinian writer Jorge Luis Borges wrote the most marvelous short stories – concise, incredibly inventive, and I always tried to model the way that I wrote short stories on his.

Tolkien – The Lord of the Rings is still a favourite, even though I rarely read fantasy. It is just so complete.

Any basic writing philosophy or tips?

Write for yourself. Write the story that you would like to read. If it doesn’t interest the writer and their heart isn’t in it, then it will be difficult for him or her to write it so that it interests anyone else.

Sometimes I have a feeling about a character and want to use a particular name, but usually, other than trying to ensure that most characters have names that begin with different letters to avoid any confusion, it’s entirely random.

How much do you structure your stories before you write them?

Structure? What’s that? Seriously, I’m very much a pantser, and generally lousy at planning anything. But having said that, now that I’ve returned to ‘The Assassin’s garden’, I feel that I need to take a step back and write a good plan for it, even if that means junking some of what has been completed already.

Oh, to revise. Definitely. There comes a point where I think that I cannot possibly read through it yet again, but I’m conscious that there are still grammar and continuity errors to sort out, so it must be done!

I know the feeling. I spend way more time revising than drafting. What do you do when you get stuck writing your story?

Go for a walk. It’s the best remedy that I’ve come across, and rarely fails. I don’t attempt to think too hard about the problem, it’s more like just seeing what comes into my mind as I walk.

Do you have a writing routine?

A routine! I am a warning to others when it comes to routines. I simply cannot discipline myself sufficiently to have a proper writing routine. I get distracted by things far too easily. Bleurgh!

I’d be very uneasy with it, actually. It would be nice to make a living from writing – no, it would be fantastic to make a living from writing, but I really don’t want fame; I should probably have gone for a Pen Name, but it’s a bit too late now. And rich? Comfortable would do me. I’ve spent a large part of the last 60 years worrying about money, and it would be nice just to have enough not to have to do that anymore. The one thing that I would definitely indulge in would be travel. I’d justify it as research, of course!

24 comments on “Interview with Mick Canning”