Home › Reflections › Book Tag–The Who, How, What, Where, and When of My Reading

Book Tag–The Who, How, What, Where, and When of My Reading

Beaton chose me in the This and That Book Tag, and I thought I’d thank him and answer this one. It looks fun. 🙂 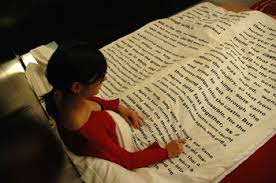 Would you rather read in bed or on the couch?

Most of my reading happens propped up by pillows in bed. I am a complete feminine stereotype when it comes to the possession of fluffy pillows. Interestingly, my sister is an interior designer, and she concocts a lot of window coverings accompanied by many pillows. Perhaps there’s a genetic component. 🙂

Do you prefer male or female main characters?

I find my writing is split fairly evenly between male and female. In Snow White and the Civil War and Hans and Greta, I alternated first person between the male and female protags. I’ve always loved that POV shift when the author pulls it off.

In books that I read, you most often get male POV characters just because it’s more common. But I did end up reading more female authors than male ones, and it wasn’t a deliberate thing–it just turned out that way. Patricia McKillip, Robin McKinley, Robin Hobb, Anne McCaffrey, Diana Wynne Jones, Connie Willis, JK Rowling and Joy Chant never failed to delight me with a new book. And okay, I loved Tolkien. Zelazny, Adams, Pratchett, and Powers, too. I didn’t read just gals.

The whole writer gender disparity thing took me by surprise. I never even considered caring if the author was male or female. I just cared if it was a good read. So I’ve decided not to use initials when I publish. With one notable exception, all the ladies listed above used their entire feminine name, and it didn’t seem to hurt them any. If you’re a female author and have decided to go the initials route, I certainly understand, especially if you have a predominantly male readership, like thrillers. But I think long term, for me at least, it’s better just to publish as a woman. With all the other women doing the same, I think it’ll soon be a nonissue.

Ack. Neither. I’m in the middle of strenuous dieting. There is absolutely no point in me writing a diet book because I guarantee it would never be popular. The title would be something like: Stay Hungry Until You Can’t Stand It Anymore and Then Do It Some More Anyway. Snacks don’t look like an option anytime soon.

But when I reach my target weight, we’re going out for pizza. 🙂

I never really cared. For many years, The Lord of the Rings was the Book of All Books, and I still retain a great fondness for Professor Tolkien. So, if we’re going by all-time favorites, that would have to win.

But I also loved Zelazny’s Amber books which came in two series of five. Charles de Lint wrote a lot of stand-alones, although my favorite was a two-book series retelling Jack the Giant Slayer. The number of books in the series doesn’t matter much.

What did matter to me is when authors kept writing a series long after it became stale. It always annoyed me. Quit and write another story instead of rehashing the same plot line. I always respected authors more when they came to the end of something and then stopped. Zelazny was an excellent example of that.

So I view the whole advice to write in a series with a certain amount of suspicion. I think we should write until the story’s done. Pratchett found an excellent way of maintaining a series–he kept it all on Discworld, but he had several stories with different characters running simultaneously. That really helped it stay interesting for me. If I ever have a long series, I’d like to write something like that–many stories all on the same world. I’ve been thinking that maybe my Faerie Travel world (found in my free book, Dragon Hoard), might suit the purpose there. I think there are still enough people who want to read urban fantasy, as long as it’s good.

Do you read at night or in the morning?

Pleasure reading happens mostly at night, since I try to save the time right after I wake up to write. But I will admit to the occasional guilty morning pleasure of finishing off my book instead.

Do you prefer first person or third person point-of-view?

I don’t have strong feelings on this one. I’ve written two-thirds of my novels in first, but I most often use third in my short stories. It’s just easier, especially if you write under 1500 words, like I often do. Put the character’s name in the first hooky sentence and you’re golden. First person takes more words to introduce and describe the character.

The short answer is yes, but for history, unless you’ve got a good used bookstore in your neighborhood, the selection at bookstores is usually lousy. We have a terrific one that only charges a buck a book and all proceeds go to help rescue animals.

Do you prefer books that make you cry or laugh?

Ideally, you find them both in the same book. I reread more happy endings than sad ones, but I like a good bittersweet ending. I prefer there to be some hope at the end, though.

At this point I’m supposed to tag ten more people, but I don’t like putting anyone on the spot. I thought it was fun, and even interesting in an interview-y sort of way. If you’re reading this and want to give it a go, please consider yourself nominated by me. I’ll go to your blog and enjoy hearing about what you read. 🙂

Tagged with: Cathleen Townsend, reading, This and That Book Tag
Posted in Reflections

6 comments on “Book Tag–The Who, How, What, Where, and When of My Reading”