Posted on November 19, 2015 by cathleentownsend — 2 Comments 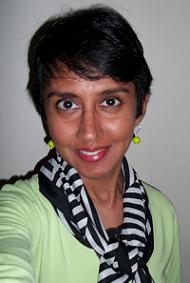 Our guest this week is one of my friends from Absolute Write, Marian Perera. She was born in Sri Lanka, grew up in Dubai, studied in Texas and lives in Toronto. For now. She works as a medical laboratory technologist by day, but writes fantasy and romance by night. Her most recent story is Christmas Yet To Come, the first in a trilogy starring the three spirits of Christmas…and what happens when they become all too human. Because some gifts are unexpected, and worse still, can’t be returned to the store.

What was the funniest mistake you’ve made as a writer?

I sent out perhaps ten queries that included the line, “she must save her people from the apocalyse.”

I don’t know how that spelling mistake slipped past me, but it’s not like forgetting one of the r’s in “embarrassing”. You notice when the p is left out of apocalypse. Maybe that’s why none of those agents requested my manuscrit.

And yes, I did that on urpose.

That sharks cannot get rabies because the disease affects warm-blooded animals.

Isn’t that a relief? Rabid sharks would be scary. Well, scarier, which is why I’ll write about one anyway. Jaws meets Cujo.

Hmm, rabid sharks really would be a problem. What about your upcoming work?

An upcoming work I’m excited about is my March release, The Beast Prince. It’s a Beauty and the Beast retelling where she’s a sharpshooter of Japanese descent, and he’s been cursed into human form.

When Katsumi Ito grudgingly agrees to serve Marus, a powerful earth elemental, it’s her only way to placate him so he won’t harm her people. She doesn’t realize the real reason for his arrogance and his commands. He’s determined to put up so intimidating a front that she will never suspect he’s lost his powers and is trapped in his human form. But being forced into close quarters starts to reveal true colors on both their parts, and to Marus’s dismay, he falls for his servant. Regaining his powers is a matter of survival, but now he might just have found something—someone—he needs even more.

I remember beta-reading that one–I’m glad to see it published. How do you decide where to set a story?

I love variety. My first novel was set in a fantasy version of Victorian England, but the second was on a Master-and-Commander-esque sailing ship. Sequels took place on a steamship and an iceberg.

After that I took a break from the ocean and went to pre-colonial Africa. I’m back in Victorian England for the Ghosts of Christmas series, but am planning a trip to pre-colonial Australia eventually.

Writing fantasy is like having a private plane and a time machine inside your head.

It really is. And you get to make worlds, too. How do you manage world-building? Is it all thought out ahead of time, or do you make it up as you go?

Both. I need to know beforehand what the most distinguishing characteristics of the world will be like. For instance : the people reproduce like bees (a few fertile women have lots of children, mostly daughters, while others are workers/soldiers). Or : magic is provided by symbiotes like leeches which live off the magician’s body, but also act as batteries of raw power.

These features usually end up having a lot of influence on the characters and plot, so I have to know them well before I start writing. But I get plenty more ideas for the world while I write, and these can always be blended into the draft or edited in later.

What has been the hardest thing about publishing for you?

Promotion! Especially in real life, where I tend to be self-conscious. Plus, I work in a medical laboratory, which to me is the last place where one can say, “You know, I wrote this scorching fantasy romance…wanna see?”

People who know me for a while before they find out I’ve published several books tend to be startled. One of my (male) co-workers said, “Hot romance? But you wear button-down shirts, and cardigans!”

Thanks, dude. For all he knew, I could have been decked out in Frederick’s of Hollywood underneath. I wasn’t, but hey, it was theoretically possible.

Anyway, yeah, promotion. I like writing guest blog posts and doing interviews, but I’d much rather finish a whole new manuscript than routinely try to come up with ingenious ways of getting my name in front of readers.

Read extensively in the genre you want to write in.

Seriously. I’ve lost count of the number of times I’ve seen someone decide to write romance without being aware that the story must end with the main characters happy together. In fantasy, don’t stop at Tolkien.

No one can read everything, but if writers aren’t aware of what’s being done in a genre, they’re likely to either disappoint readers or reinvent the wheel.

That’s usually my subconsciousness saying, “Something about this story doesn’t work.”

So I take a short break from that particular manuscript. I always have other stories on the back burner, so I work on them instead, which also helps me to get some distance from the problem. Once I look at it objectively, I can analyze how other authors tackled a similar issue, or how my previous stories in the series were structured. And once I resolve that, it’s surprising how easy the writing becomes again.

My parents found me trying to read a huge hardcover copy of The Lord of the Rings when I was six, so they gave me a more age-appropriate paperback of The Hobbit. That started my fascination with fantasy. I like science fiction too, and these days the two genres can overlap quite a bit.

As for romance, I enjoy that because it’s the perfect balance to some of the more grimdark elements in speculative fiction. Romance offers a safety net, an assurance that the people you’ve come to care about will be all right in the end. It’s my go-to genre when I want to feel warm and happy. 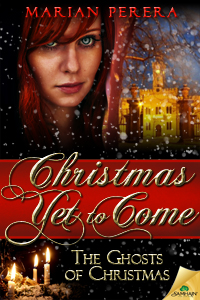 Sure. This one is from Christmas Yet To Come, after Laura has told Justin that although he sees her as a mysterious woman who knocked on his door seeking shelter, she’s actually the Ghost of Christmas Yet To Come (now turned human). And she shows people visions of their own deaths to turn them aside from their wrongdoing. Justin, however, thinks it’s blatantly manipulative to frighten anyone into repentance.

“I have to tell you something else,” she said. “I’ve seen your future.”

“You have? Oh, wait, I’m one of these unfortunate victims who has to be terrified into becoming a better man. I’m sorry, but that didn’t occur to me until now.” He sprawled comfortably in his chair, as if preparing to be entertained. “Go ahead, please. Did I starve because I was too stingy to buy bread, or was I trampled by a crowd of widows and orphans I’d evicted?”

If you could instantaneously master one writing skill, what would you choose and why?

The ability to write anywhere and under any circumstances.

Everything else I could learn on my own. But if I could write on a swaying bus, on a subway rocketing me to work, when I only have twenty minutes left of my lunch break, when I’m tired or worried…I’d have a lot more completed manuscripts.

It would be handy superpower. What author’s style do you admire the most?

The most beautifully written book I ever read is Laurie Halse Anderson’s Wintergirls. It’s lyrical, vivid and bittersweet, an appeal to every sense you have and a few you weren’t aware of.

That said, the author whose style most consistently works for me over a number of books is Ray Bradbury. He could describe a paper clip and have you see it in a completely new way.

What is the next big thing you want to write about?

A fantasy set in Australia.

I became fascinated by Australia long ago, after reading and watching The Thorn Birds, but these days I can’t help noticing the complete absence of Aboriginal Australians from both the book and the miniseries. I’d love to write something that uses a couple of tried-and-true fantasy tropes, like dragons or magic, but is set in the land—and the culture—of Rabbit-Proof Fence.

What is the single most important quality in a novel–what must an author do to win you over?

Hook me in any way possible.

On my keeper shelves are a few novels with characters so flat they could slide under a door, or even characters I hate. Books with racist or sexist stances on the authors’ part, books I would recommend only with detailed warnings beforehand.

So why are they keepers? Because something about them works brilliantly—so well that it more than makes up for the frustrating or awful parts of the stories. And that something can be worldbuilding, style, plot or character. Of course, I love it when all of these are intriguing and well-written. But even if only one thing about the story appeals to me, if that aspect gleams brightly enough, I’ll snap at the bait.

Find out more about Maian Perera at http://www.marianperera.com.

2 comments on “Interview with Marian Perera”