Posted on October 8, 2015 by cathleentownsend — 6 Comments

Alon Shalev lives and writes in two worlds. He is the author of three social justice-themed novels including Unwanted Heroes, and an award-winning epic fantasy series. He’s convinced there is a connection.

In 2009, while on a family camping trip in Northern California, Shalev began writing an epic fantasy novel to read to his sons around the campfire. Over the next five years, both his sons and the ancient redwood forests bore witness to the summoning of the Wycaan Masters, as each new manuscript was read on the annual camping trip to these diligent but tough young editors.

His first epic fantasy novel, At The Walls Of Galbrieth, won the 2013 Eric Hoffer Book Award – YA Category and was a Grand Prize Finalist. The fifth book in the series is From Ashes They Rose was released last week. All books are published by Tourmaline Books.

I think it actually selected me. As you mentioned, I was already an author of social justice themed novels. This exploration into epic fantasy was a spontaneous family vacation adventure. But the genre has a habit of hooking people and five books later, I’m still loving it.

What about your most recently published work?

We have just released From Ashes They Rose, which is the fifth in the series. The novel is written to the level of my eldest son, now 16, and the series (particularly from Book 4 onwards) has become progressively complex. There is the unsure romance of young people, the pressures of peers, expectations, and responsibility, along with themes of racism and gender inequality.

Do you have a writing routine?

When I am in the creating process it can be very intense. I write a 100,000 word terrible first draft in three months. I rise at 6am and commute into my office, where I can write for 1.5 hours at least before the workday and then I write from 5-6pm before traveling home. After the kids go to bed, I will continue until my head falls on the keyboard (which can be very messy!). At the weekend, well, I have a very understanding wife. The next stage – editing – is similar, but less intense.

Some writers are going to hate me, but I rarely get stuck. If I do, I will go back and read the previous few chapters and that works. If you write freestyle (rather than planning each chapter before writing), you must have faith in the process and that the story wants to be told.

I have written Book 6, though it needs a lot of rewriting and editing. It is scheduled for March 2016 (which probably means late summer!). After that, I am not sure. I have written a magical realism novel and am reading it to my writer’s group. I am very excited about this, but have offered another Wycaan Master trilogy to my publishers and already written several chapters.

Any advice for aspiring authors? Any basic writing philosophy or tips? 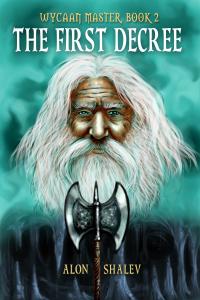 Write! Write! Write! Show up every day without excuses or judgment. Writing is a discipline, and no different from hitting the gym or seriously playing a sport. Your writing muscles must be toned and used.

There are two ways to write: freestyle or planning (and probably many hybrids). This is a personal decision and there is no right and wrong. I used to make excuses to writers and MFA professors with raised eyebrows and intricate tables and lists. There are great authors in both camps. If you sit in the freestyle one, however, you need to trust it and need to show up. The muse doesn’t wait. I will pull my car over to the side of the road and scribble a few lines if they come to me. Once I have started a novel, I believe in it. I am the conduit for the story, and it is my responsibility to write it all down in the best way I possibly can.

Who are your writing heroes and why? What author’s style do you admire the most?

There are many. The giants: Tolkien, Robert Jordan, R.A. Salvatore, Terry Books, Terry Goodkind, but let me share three who are not quite there, but will be:

I love writing and would happily be rich and famous. But I work for a global human rights organization (American Jewish World Service) that empowers the poorest and most marginalized people in the world to protect their human rights and lift themselves out of dire poverty. I love my elves and dwarves, but I never want to turn my back on those in the real world who desperately need our help.

What was the funniest mistake you’ve made as a writer?

Two things come to mind: In At The Walls Of Galbrieth – our young heroes rode their horses into a gorge, were ambushed, won, and then walked on through the desert. My youngest (then seven years old) chirped up: “Oh no! They forgot their horses.” I had to faithfully promise him I would rewrite the scene. When I tucked him up in bed he said, yawning: “Don’t forget the horses, Dad.”

My second mistake is when I sent the aforementioned manuscript to the editor. It had gone through my writer’ group, a few beta readers, and many rounds of my editing. I wrote to her that the ‘manuscript is pretty clean.’

She returned 250 pages with comments on every paragraph (all of which were absolutely correct). She did, however, have the good grace not to comment on my estimation of a clean draft.

I believe it is R.A. Salvatore who said that an author is a writer who never gave up.

What is the most memorable writing comment you’ve ever gotten?

I will share two. One reviewer on Amazon said: “…being recommended by my favorite author, Christopher Paolini (the Inheritance Cycle), and following the author Alon Shalev on twitter. Diving in, the world Shalev created is reminiscent of Middle Earth and Alegasia.”

The other was a thread going around Facebook where people listed their top 10 authors. One epic fantasy fan listed all the great authors…and snuck me in at No. 10. I was chuffed and it is pinned to my noticeboard by my desk.

You can find out more about Alon Shalev at http://www.alonshalev.com.

Tagged with: Alon Shalev, At the Walls of Galbrieth, From the Ashes They Rose, interview, The First Decree, Unwanted Heroes
Posted in Author Interviews

6 comments on “Interview with Alon Shalev”