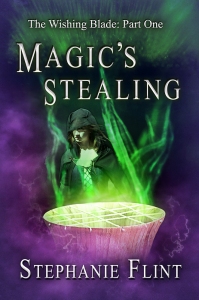 Magic’s Stealing has an interesting premise: that all magic is in the form of ribbons, and these can be seen by adepts as they manipulate them.

The story focuses on Toranih, a young woman who has always scorned magic, in part because she is less gifted than her sister. But when magic is stolen from most adepts, Toranih has to step forward and hone her skills, to protect her family and her home.

I liked the book. It’s an episode, really─a smaller arc within a larger tale─but if you don’t mind that, then you would probably enjoy the story. It has magic, a character who grows, swordplay, a power-hungry nemesis─all the classic elements of a fantasy tale, with a unique twist in the world-building.

I have some unanswered questions about the story, but perhaps those will be addressed in subsequent volumes. I would’ve liked to read more about the protagonist’s sister, who became much more important by the end, but she may play a larger role as the story unfolds as well.

I’d give it three stars using the goodreads scale and four on Amazon, which essentially say the same thing: I liked the story.

Full disclosure: I received a free copy in exchange for a fair review.