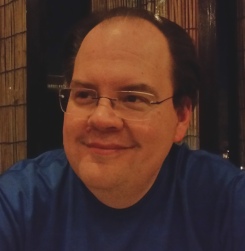 JD Byrne was born and raised around Charleston, West Virginia, before spending seven years in Morgantown getting degrees in history and law from West Virginia University.  He’s practiced law for more than 15 years, writing briefs where he has to stick to real facts and real law.  In his fiction, he gets to make up the facts, take or leave the law, and let his imagination run wild.  He lives outside Charleston with his wife, one-eyed dog, and black cat.

His first book, The Last Ereph and Other Stories, came out this spring. His first novel, Moore Hollow, will be released this fall. His most recent story, “The Destiny Engine,” is currently available at Amazon.

I think that would be Strefer Quants, who is one of the main characters in The Water Road trilogy that will be coming out next year. It’s a fantasy series about a world thrown into upheaval when a terrible secret is revealed. Strefer is a journalist (the setting is about equivalent in terms of time period to the late 18th/early 19th centuries) who wants to get the word out. She comes from a society based on various guilds, rather than families, and winds up butting up against a more traditional, patriarchal aristocracy. She’s been fun to write, an interesting voice to play with.

My recent story “The Destiny Engine” is a steampunk retelling of a Brothers Grimm tale, in which I need a character to input information into the titular machine. I had him sitting at a keyboard, but some beta readers wondered if the term would be familiar to Victorian ears. I went looking for the answer and found out that they would, but that there were a whole lot of other similar devices that were around at the time that might have a better “steampunky” vibe. That led me to the Hansen Writing Ball, which I adapted into the story. It’s like something out of Terry Gilliam’s Brazil – totally inefficient yet still somehow functional. I’d love to have one!

What about your most recently published/upcoming work?

My most recent publication is “The Destiny Engine,” a short story retelling of a Brothers Grimm tale, “The Aged Mother,” in a steampunk mode. It’s about a desperate woman who seeks aid from an inventor who lives out in the wilds of Wyoming. He’s created a machine, the destiny engine, that allows people to see an alternate path that a person’s life might have taken. The inventor isn’t sure it works, although his inventions have a habit of working too well.

Next up is a novel, Moore Hollow, which is partly set in my home state of West Virginia (although in a fictional location). It’s about Ben, a down on his luck British journalist, who comes here to look into a fantastical story told by his great great grandfather, who worked briefly in the local coal mines. The story involves a corrupt local politician who allegedly raised the dead in order to vote for him. Ben tries to find this little town’s secret, but then wrestles with what to do with it, whether to use it to get his life back on track or not.

Next year will be the year of The Water Road, the fantasy trilogy I mentioned earlier. It involves three novels – The Water Road, The Endless Hills, and The Bay of Sins – along with at least one novella that goes into the background of one of the secondary characters.

Where do you come up with ideas for new characters or stories?

Anywhere I can! Years ago I was at a legal seminar and the speaker mentioned always carrying a small notebook around with him (this was the distant past in the days before smart phones) to jot down potentially useful bits of information he came across. He was talking in the context of finding information that might help legal arguments, but I’ve found the same attitude applies to ideas for stories or characters.

One of the great things about writing fantasy and science fiction is that I can take inspiration from the real world and rework it into something completely different. Moore Hollow was sparked by the reality that West Virginia has a history of electoral shenanigans, so why not raise the dead? The Water Road kicked off when I read a blurb somewhere about Napoleon’s 100 Days and thought the whole episode sounded like something that would happen to the bad guy in a story that needed to come back for a sequel.

That’s something I usually struggle with. Thankfully I see a lot of names come through my world at my day job, some of them are interesting enough to stand out. Like ideas, if I find a potential for a good name somewhere out and about I’ll jot it down (trips to Ikea used to provide quite a few!). I’ll also rely on some great resources like the Writer’s Digest Character Naming Sourcebook, the Behind the Name random name generator, and the Social Security Administration’s database of popular baby names.

I try and do as much world-building as I can up front, since I can’t get a good idea of where a story can go until I know where it will be set. For something like Moore Hollow that takes place in the “real” world, there wasn’t much to it. The Water Road, on the other hand, involved lots of work before I wrote a word. I came up with names for the various clans of one species and their gods, not to mention a very crude map so I could keep track of everything. I also came up with rules for naming people and things as I went along.

Having said that, things always come up later in the process that require more building. In Moore Hollow, for instance, I initially set it in a real town in southern West Virginia, but found that it didn’t fit quite as well as I had hoped. So I created a fictional town, which is the county seat of a fictional county, and had to come up with some backstory for them.

Definitely harder to write the first draft. I’d like to say I’m one of those writers out of whom words flow effortlessly, but it often takes a great deal of work. I have a day job, so my writing occurs around that and family business, so I’m not always the most inspired when I have the most time. I find it much easier to work with a finished story and try to make it better.

Writing is more difficult, but it’s ultimately more rewarding. When you write something you’re creating, pulling something new out of thin air. Revising is easier, but also less revelatory.

What’s the best part about being a writer?

Although I get a great deal of satisfaction at seeing a finished book all together and read for the world to read, the best part about being a writer is the writing itself. You’re in control of your own little universe and can steer the story and characters anywhere you want to go. Sometimes I wind up going down tangents that become important parts of the story, so there’s a sense of discovery in there as well.

I think the best strategy is to write the kind of stories you want to read. I’ve been a science fiction and fantasy reader all my life. I grew up on Asimov, Adams, Vonnegut and the classic dystopians (Huxley, Orwell). The fantasy stuff has mostly come later, particularly thanks to my wife who introduced me to Neil Gaiman’s work. It’s a fun place to write because there are no rules about the stories you can tell. Almost anything can be adapted with a speculative spin. Plus, I think by telling stories that exist apart from the real world, we can gain some insight into how people relate to each other.

What is the most memorable writing comment you’ve ever gotten? It can be the best, or worst; you decide.

Then I’ll go for best. I finished the first draft of The Water Road years ago. I had someone in my office do a beta read, someone who reads fantasy and who I thought might enjoy it. She came back a few days later, handed me her notes, and said, “when’s the next book going to be done?” It’s taken me a while to get back to that world, but it’s always great to hear a reader who just wants more.

What is the next big thing you want to write about?

Beyond The Water Road trilogy next year I’ve got a few ideas pounding around. One thing I’m playing with is doing a series of novella’s that tell a serialized story, releasing one a month for a year (or so). I like the idea of playing with that format and I think I have a story that will work that way. I’ve also got another series, more of a steampunky fantasy thing, that I’ve done a lot of work with on world-building (maps!), but I haven’t had the chance to really start with. But my “ideas” file is pages and pages long, so if neither of those pan out, something surely will!

Ah, that’s the dream, isn’t it? The main thing I’d do would be retire from practicing law so I could write full time. Beyond that I’ve not given it too much thought because I don’t think it’s likely to happen. If it does, I’ll be happy to enter unexplored territory.

Find out more about JD Byrne at  www.jdbyrne.net.

Tagged with: JD Byrne, Moore Hollow, The Destiny Engine, The Last Ereph and Other Stories
Posted in Author Interviews