Born in a Treacherous Time by Jacqui Murray 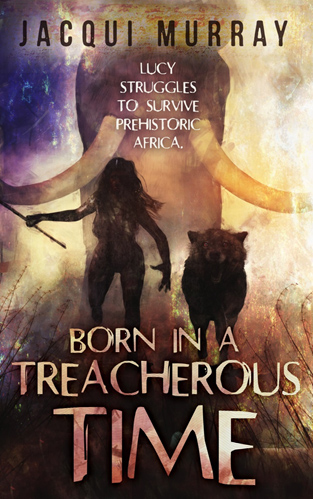 Jacqui Murray has done it again–she’s released yet another fast-paced book for our reading pleasure. This time she’s jumped genres, and she’s taking us on a tour of prehistoric Africa.
***

Born in the harsh world of East Africa 1.8 million years ago, where hunger, death, and predation are a normal part of daily life, Lucy and her band of early humans struggle to survive.

To make it worse, Lucy’s band hates her. She is their leader’s new mate and they don’t understand her odd actions, don’t like her strange looks, and don’t trust her past.

Born in a Treacherous Time is prehistoric fiction written in the spirit of Jean Auel. Lucy is tenacious and inventive no matter the danger, unrelenting in her stubbornness to provide a future for her child. You’ll close this book understanding why man not only survived our wild beginnings but thrived, ultimately to become who we are today.

This is a spin-off of To Hunt a Sub’s Lucy (the ancient female who mentored Kali Delamagente.

So, Jacqui, I love the genre switch, and especially the new cover, but why the change from military thrillers to prehistoric narrative?
***
Lucy’s story in Born in a Treacherous Time was my first effort at fiction writing. A good-meaning agent suggested I move the story into the present rather than a niche market like prehistoric fiction. From that was born To Hunt a Sub. But, Lucy nagged me for two decades until I finally agreed to write her story. This was the only way I could silence her!
***
What is it about prehistoric society that drew you, as opposed to a more recent era?
***
From the little bit I used to know about earliest man’s life, I just couldn’t figure out how we survived. Even with a clever brain, we had no claws, thin skin, and worthless teeth. One thing led to another, and I was reading everything I could just to satisfy my curiosity. Even then, it didn’t make sense. Only by putting it in context–as Lucy’s life–did the pieces fall into place.
***
How did you do our research? Did you go to a lot of museums?
***
I did all my research online, in museums and libraries. Most were local, but I did go all over the country visiting libraries with in-depth research on this topic. That included three glorious days at the University of Notre Dame library and one full day at the Library of Congress. What fun!
***
How will this series progress?
***
I love the idea of writing about how man survives, especially in tough times. Next in the series is the time of Homo Erectus, 850,000 years ago. That story will take two books. Not sure if I’ll go back to Lucy after those two, or proceed with Cro-Magnon man.
***
Well, we’ll all look forward to seeing how your series pans out. In the meantime, though, you can pick up a copy of Born in a Treacherous Time here: https://www.amazon.com/Born-Treacherous-Time-Nature-Book-ebook/dp/B07CTCR944/.
***
And if you’re still on the fence about checking it out, Jacqui’s already gotten a lovely Kirkus review I’d like to share with you here.

“Murray’s lean prose is steeped in the characters’ brutal worldview, which lends a delightful otherness to the narration …The book’s plot is similar in key ways to other works in the genre, particularly Jean M. Auel’s The Clan of the Cave Bear. However, Murray weaves a taut, compelling narrative, building her story on timeless human concerns of survival, acceptance, and fear of the unknown. Even if readers have a general sense of where the plot is going, they’ll still find the specific twists and revelations to be highly entertaining throughout.

A well-executed tale of early man.”

23 comments on “Born in a Treacherous Time by Jacqui Murray”