Addicted to Dimes by Catherine Townsend-Lyon 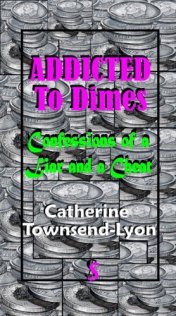 I’ve never liked going to casinos much. It’s not just the completely artificial environment, nor knowing that all the games are rigged to favor the house. It’s the sheer desperation wafting off some of the casino patrons. People are ruining their lives there. I’d rather eat or see a show someplace else.

Addicted to Dimes is the poignant story of a young woman whose life was torn apart by her casino habit. She emerged from a childhood that contained sexual abuse and frequent criticism to seek help in the wrong place—gambling.

Money conveys status, and it’s easy to see how someone who is unsure of their own worth could be sucked in. And our society makes it so easy—native gambling casinos, lotteries, Keno, bingo—it’s all over the place. The gambling machines are usually conveniently located near ATMs.

The author tells of a life that spiraled out of control—embezzlement, arrest, accepting that she was a liar and a cheat rather than give up gambling. And how she finally turned it all around and gave up her compulsive behavior—even though she still had to face all the same triggers as before, with the added burden of constant financial worry as she and her husband tried to pay back all they now owed.

All in all, a compelling story of how a behavior can act on your system like a drug, including early warning signs. I give it four stars.

Tagged with: addicted to dimes, book review, catherine townsend-lyon, confessions of a liar and a cheat, gambling addiction, memoir
Posted in Book Reviews

21 comments on “Addicted to Dimes by Catherine Townsend-Lyon”