I met Madeline through Absolute Write, a site which I highly recommend for writers looking to polish their skills. Madeline posted a submission call for her new magazine there, Fantasia Divinity, and I submitted my short story, “Unicorn,” to her. It was accepted and will be in the first issue, coming in August. *throws confetti with reckless abandon*

I’ve loved working with Madeline–she brings both skill and helpfulness to the whole publishing process. And she agreed to talk about her new mag and her writing here with us.

So, Madeline, why did you start a new e-magazine?

That is a lovely question, and one that I don’t really have an easy answer for. A lot has been going on in my personal life lately. My grandfather is sick and there is nothing I can do to change that. I have two books in the publishing process, but as anyone who has been there knows, that process is slow, and once again, there is nothing I can do about it. I guess, in one way, I wanted to be able to do something. I love the writing community, and am so grateful for all the help and support I have received from people within the community and this is my way of giving back.

What is unique about Fantasia Divinity?

One thing I am planning to do for the magazine is create a team of characters, perhaps like mascots. I already have one done, her name is Fantasia, and she will be introduced in the first issue. These characters will appear in short little story segments on occasion in the back of the magazine. I want to make them really short though, so as not to take away from the other stories by the featured authors. I want the magazines to be about them, not me.

I think having your own little pantheon of characters would be great. I can totally see Fantasia giving us little short snippets to introduce the stories. What sort of stories are you looking for? Specifically, what kind of story touches a chord in you?

Right now, we are accepting submissions from all genres, but my personal favorites to read are fantasy. I love stories that take me away to another world with endless possibilities. Also, I really like horror, as long as there are no snakes.

You and Indiana Jones both. 🙂 What’s your favorite short story?

I honestly don’t think I have one set favorite. I guess the one I’ve read the most would be “The Black Cat” by Edgar Allan Poe.

What artwork would you be interested in viewing for Fantasia Divinity? What styles and subject matter do you find most compelling?

As mentioned before, I am a sucker for fantasy. If you want bonus points then you can incorporate mythology into it (especially Norse). I myself mainly draw fantasy girls, but that is largely in part to my lack of skill drawing men. This doesn’t mean that we won’t consider other kinds of art, however. 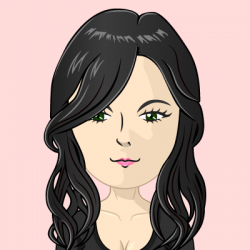 Besides writing (and now publishing!), what are your favorite things to do?

I love to draw. And play video games.

In your own writing, who’s your favorite character you’ve written so far and why?

I guess it would be Queen Moonbeam from my children’s book, Once Upon a Unicorn, mainly because I have more of an emotional attachment to her. She is based off of my childhood imaginary unicorn friend.

I never had an imaginary friend, and I’m always a little envious of those who did. I’m trying to make up for lost time with characters in my stories. 🙂 What’s the craziest story idea you’ve ever had? And did you write it?

According to my husband, the craziest would be my unicorn story because when I first had the idea, I was running a very high fever and slightly delirious. Apparently the initial concept was described in a somewhat less than coherent manner. But did I write it? Yes. Yes I did.

I love that. Only a writer or other artist would look at a fever as an opportunity to create something different. What about your upcoming work?

I currently have two books in the works, both set to tentatively come out either at the end of the year or early next year.

The first one, Lithium, is actually the first novel I wrote. I wrote it when I was 15, and at the time it was like my therapy to try and deal with some of the things I was going through. I am bipolar, and my symptoms began to manifest in high school. I was confused, and depressed, and angry all the time, and yet I didn’t know why. My parents were in denial about what I was going through, and by the time they did realize the severity, I was so bad that I had to be admitted into a mental institution. Lithium was my way of trying to make sense of it all; to relieve some of that anger. It is fiction, but it is laced with some truth as well.

The second book is a chapter book called Once Upon a Unicorn. It will be the first in a series of stories that take place in a world called Radona. It is about a young girl who is whisked away to Radona in order to help find a missing unicorn princess.

I always have several things I’m working on at any given time. Right now, I guess I am most looking forward to starting a new project that I have been letting marinate in the back of my mind for a while. Imagine, Ever After High meets The Hunger Games. It will be a high school story where the students learn how to become gods and goddesses, but upon graduating only one actually gets to become a god. However, this has a cost. In order for a mortal to be granted that kind of power, a sacrifice must be made, and that sacrifice is another student. So there is a lot more at stake than just not getting accepted; you could be chosen to die.

Where do you come up with ideas for new characters or stories?

Everywhere. I can find ideas in almost anything. I never know what might trigger something. I do get a lot of ideas from my dreams though. I have some pretty bizarre dreams.

I keep a pad and pen on my nightstand in case I wake with a vivid dream running through my head. They’re usually no help with names, though. How do you come up with character names?

It really depends. I have one story in progress where almost all the characters have Shakespearean names or names pulled from various mythologies. Sometimes I will have a feel for a character where I know I want a name that starts with a certain letter or has a certain origin but can’t think of anything. In those cases I will go to name databases. I have a running list of names and name meanings that I really like that I can consult as well.

How much do you structure your stories before you write them?

I usually do just a simple outline and go from there. I try to outline by chapters and sometimes I will build a little on it, but it’s usually pretty basic.

Revise. I hate revising my own work. I start to want to change EVERYTHING and start adding. At some point I just have to make myself stop.

I feel you on this one. Supposedly, a book is never finished, only abandoned eventually to the publisher. What has been the hardest thing about publishing for you?

Me, too. How about something you can control? Do you write with a word count goal? If so, what is it?

I don’t think I have yet, although I am leaning towards focusing on middle grade fantasy for right now. I have WIPs in all age ranges, which are mostly in the fantasy genre, but then I have short stories that are mystery and horror. Really, I’m all over the place.

My all time favorite quote is by Edgar Allan Poe: “All that we see or seem, is but a dream within a dream.”

As Madeline said, submissions for Fantasia Divinity Magazine are open! Send a story and help support a new mag from a lovely lady. 🙂