Home › My Stories › The Taste of Fear

The Taste of Fear

Fear comes in many flavors.

There’s the adrenaline rush, so addictive for some that they seek safe forms so they can experience it on demand. There’s the sick dread of seeing something coming and knowing there’s no way to stop it.  And then there’s staring death in the face, knowing it will win.

Fortunately for me, I was wrong about the last. 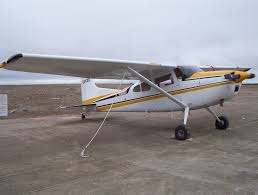 As part of my divorce experience, for once in my life I had done something irresponsible. I’d taken some of the proceeds of the house I’d sold and bought flying lessons with them. The inciting event for this, Hal, was walking by my side to his four-seater Cessna 180. A high wing tail-dragger, it was harder to land than the tricycle undercarriage planes I was used to, but I was looking forward to trying someday. Hal wanted me to have more hours of flying time before I did, though, so he would be pilot-in-command for tonight’s flight.

Pilot-in-command (or PIC) is a big deal with pilots. It’s one of the few places left where personal judgment trumps laws and control towers. In an emergency, the pilot’s word goes. You may have to deal with a not-so-happy visit from a government employee later, but nobody argues with the pilot when they’re landing the plane.

It’s odd, really, that there’s so much anxiety about landing. If it’s planned for properly, it isn’t that dangerous. The landing patterns are all set up so that if you lose power, you should be able to glide into a safe landing. What’s really dangerous is take-off.

Hal and I had flown together so often that preparing the plane was an easy, comfortable thing. It was night, the air was calm and clear, and we were both looking forward to watching the southern California lights turn into strands of improbable jewels from high above. That’s the real magic of flying. All the problems stay behind on the ground, and you get to soar away from them, into the night sky.

Pre-flight checks went well. Although Hal was in charge as PIC, I accompanied him as he siphoned off fuel, checked hinges on ailerons, and ensured the oil cap was on finger-tight. There was no bad weather between us and the San Diego airport that had a nice Mexican restaurant within walking distance of the runway.

Hal carefully pulled the plane to its noise abatement run-up position. Fullerton was a small airstrip in the middle of Orange County, surrounded by houses. Nothing untoward happened, so we taxied to the head of the runway. Hal received permission from the tower, and we headed into take-off at full throttle.

“What is it?” I asked. The engine didn’t sound right, and we weren’t climbing.

Hal spoke instead into the headset. “Cessna six-niner-five needs to make an immediate landing.”

The tower came back immediately with, “Cessna six-niner-five, clear for any runway.”

That would have been more reassuring if we were flying out of Chino or Long Beach. Those are larger fields with multiple strips to land on. Fullerton only had one, and we were already out of runway. We needed to make a one hundred and eighty degree turn, and we didn’t even have three hundred feet of altitude. I had more than that whenever I turned onto final approach.

Hal banked the airplane into a shallow turn and said, “I don’t know what’s wrong. I can’t get any altitude. We can’t land on any of the roads—the street lights alone will kill us before we reach the ground. We have to make the field.”

He turned left, toward some industrial buildings, probably thinking that if we had to come down, it was better there than in the brightly lit streets and buildings surrounding us. But as we descended toward the roof of one of them, I could see that we wouldn’t clear it. We’d touch down—and plummet right off the edge.

Hal switched fuel tanks, and that got us just enough altitude to clear the lip. As we labored past, I pointed to a taxi strip. “Can you make that?”

He shook his head. “I think that last surge gave us enough to make the runway.”

This was not at all the appropriate place for an argument, so I bit my lip and watched as Hal made his approach. Even in our current situation, his glide path was smooth. But we had so little runway. Could he stomp on the brakes before we ran out?

He got us on the ground, which was a relief. But it was short-lived. The geometric design of the fence coming toward us filled my vision, and there was no way to avoid it. We were going too fast to turn—the tailwheel wasn’t even on the ground yet.

We were going to hit a block wall, and it was unlikely we’d survive. I took a deep breath and murmured, “I’m coming, Lord.”

Then we blew through a chain link fence with an ornate pattern worked into the metal strips—right onto a city street. Cars honked and swerved. But the fence had broken our momentum. The plane ground to a halt before we ran out of lanes.

I climbed out, still shaking. I was alive. Fortunately, I didn’t need to crawl over the wing—it was crumpled. But I forced myself to move, as did Hal. We needed to get away from this plane in case it blew.

We staggered away (my only injury was a sore knee), and incredibly, there was already a reporter waiting for us. She must have witnessed the crash. And that wasn’t the only unpleasantness. Many visits from government officials were compounded by incorrect snap assessments from our fellow pilots. And it was the last time Hal and I ever flew together.

But all of that faded into insignificance. Shaking with the aftermath, in a daze over being alive, still–I walked away. I had years of living in front of me.

It was one of the greatest gifts I’ve ever been given.

Author’s note: Since sometimes I write stories in first person that are completely fictional, I figured I should say that this one did really happen. 🙂

21 comments on “The Taste of Fear”